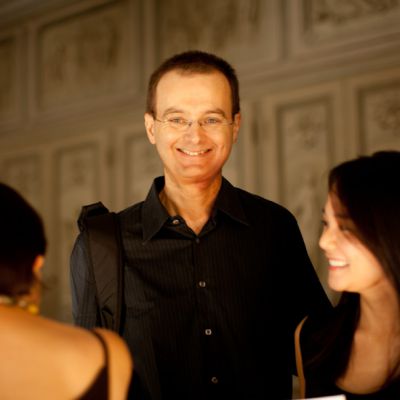 My name is Ludwig Müller and I have been the concertmaster of the Orquestra de Cadaqués since 1992. I am also the concertmaster of the Vienna Chamber Orchestra and the 1st violin of the Aron Quartet Vienna. When I am not playing and travelling I love spending time with my wife Tiffany, a very good violinist herself who also plays in OdC, and with my 3 1/2 year old daughter Mira, who has not decided yet if it is going to be violin, cello or ukulele.

What does it mean for you to play with the Orquestra de Cadaqués?

To play in OdC for me is to make great music with phantastic musicians who all are also my friends.

What are your memories of your first concert with the OdC?

On my first tour I entered the OdC bus at Barcelona airport not knowing anybody and Joan Enric Lluna, our principal clarinetist and founding member, welcomed me and told me how much he was looking forward to play the Beethoven 'Septet' with me.

Unfortunately nobody had told me about it and having never played the piece before I had 2 days to learn it next to a full orchestra rehearsal schedule. For people who don't know the piece it is also called the little Beethoven violin concerto! I don't think I had ever before played and practised as many hours a day and then sweated as much in a concert.

Which is your best memory of playing with the OdC?

That is difficult as there are many nice memories, but if I have to pick one I would probably choose the Brahms Symphonie cycle with Gianandrea Noseda.

Do you have a favourite piece of music that you would really enjoy playing with an orchestra?

As the Symphonies by Brahms are certainly among my favourite pieces I had my wish fullfilled already, but I am still missing some Mahler and Shostakovich symphonies and I hope we can do them at some point. Mahler 5 is going to be a nice start in spring 2017 [concert at the Palau de la Música Catalana on May 18th].

If you were not playing your instrument, what other instrument would you rather play?

I would probably choose cello, but I never really thought about it as I am a typical violin nerd and would not want to change it for anything.

Any other piece of music you have never played with the OdC that you would love to play?

Two pieces we have never performed with OdC are the 'Metarmorphoses' by Richard Strauss and the 'Kammersymphonie' by Franz Schreker. My other favourite piece Arnold Schönberg's 'Verklärte Nacht'; we have done it, but I really think we should do it again.

Why do you think people should attend the OdC concerts at Palau de la Música Catalana?

I am sure an audience must feel that the OdC is not simply another orchestra but a group of very talented musicians who really want to get together for making exciting music on a very high level for themselves but also for everybody who comes to listen.